Thank you! Your preferences have been saved.
Aflasafe > Food safety and health > Cancer: preventing a scourge

Aflatoxin causes liver cancer, or hepatocellular carcinoma, a terrible disease that is one of the most deadly forms of cancer. It is thought to be behind 5–30% of liver cancer worldwide and at least 30% of liver cancers in Africa. It’s a worrying statistic – but it also means that we have the chance to cut liver cancer cases by a third by keeping food safe from aflatoxin.

Aflatoxin is behind
at least
30%
of liver cancers
in Africa
Liver cancer has a
mortality rate of up to
95%
In Tanzania alone, it took
over 96,000 years of healthy life
from sufferers in a single year

A clear global trail of death and destruction

We can never be totally sure what caused a particular case of cancer in an individual patient. Aflatoxin exposure is usually chronic and long term, as the poison accumulates in our bodies over time. But scientists are sure, from both laboratory experiments (looking at effects on cells) and epidemiological studies (comparing different populations), that aflatoxin is one of the major causes of liver cancer.

Aflatoxin is the most potent naturally occurring carcinogen known to humankind.

There are four major types of aflatoxin, called B1, B2, G1 and G2. These are slightly different chemicals, produced by several species of fungus within the genus Aspergillus. Some of these species can only produce B aflatoxins, while others make both B and G aflatoxins; globally, Aspergillus flavus is the biggest culprit when it comes to aflatoxin production. Aflatoxin B1 is the most toxic of all, and is classified as a Class 1 carcinogen by the International Agency for Research on Cancer, part of the World Health Organisation. It is the most potent naturally occurring carcinogen known to humankind.

Liver cancer is now the second or third leading cause of global cancer deaths (estimates vary), with Africa, Southeast Asia and Central America hardest hit. At least three-quarters of a million people die of liver cancer each year around the world, though the true number may be much higher. Most of those who die are still in the prime of life, under the age of 50.

Lives to save in Africa

Overall, liver cancer is the third most common cancer in sub-Saharan Africa – specifically, it is the second most prevalent cancer in men and the fourth in women. Where aflatoxin contamination is worst, liver cancer rates are even higher.

We could save tens of thousands of lives every year by eliminating this cancer-causing toxin.

In Senegal, liver cancer is the most common form of cancer, while the Uganda Cancer Institute estimates that half of all the cancer cases they diagnose are related to diet and contaminated foods. Someone living in one of the aflatoxin hotspots of Mozambique is 60 times more likely to suffer liver cancer than an average person in the USA.

Aflatoxin also encourages liver cancers induced by hepatitis B and C. If a person is chronically sick with hepatitis B, and is also exposed to aflatoxin, their risk of liver cancer is 30–60 times more than with just one of these factors. There is evidence connecting aflatoxin with other types of liver damage too, such as cirrhosis.

Liver cancer is especially deadly, and very few victims escape it with their lives. In Tanzania, for example, the overall fatality rate for all cancer cases is around 80%, while for liver cancer it is up to 95%.

By getting rid of aflatoxin, we can get rid of one of the major causes of cancer in Africa. Aflatoxin deaths are totally avoidable, and it is estimated that we could save tens of thousands of lives every year if we can eliminate this dangerous toxin from our food. We know that Aflasafe can cut aflatoxin down to safe levels, and even to nothing, and so be a big part of the solution.

Cancer on the rise and costing dear

Liver cancer exacts a high cost – for those who suffer, for their families and communities, and for whole nations. When healthy people fall ill with such a devastating disease, it can have many consequences: they are no longer able to work, to care for their loved ones, to support their children’s education, or do any of the other things they want and need to do.

With liver cancer the third commonest type in Africa, safe foods and the use of Aflasafe give us a way to make big inroads into cancer’s deadly toll. 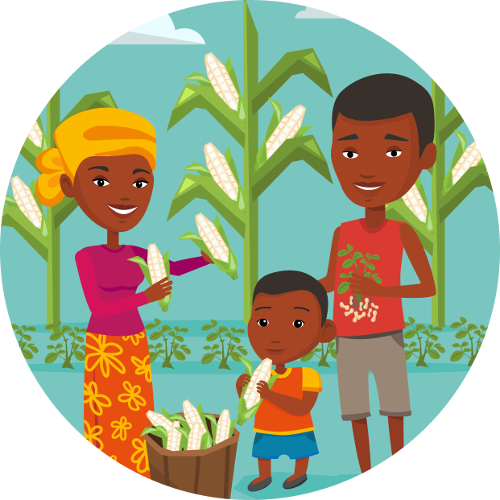 It is difficult to quantify these costs, especially since the most important losses are felt in our hearts and bodies. However, a study in Tanzania estimated that in a single year (2014), around 3,334 people came down with liver cancer caused by aflatoxin, of whom 95% would die of the disease. This took from the sufferers over 96,000 lost years of healthy life (known as disability-adjusted life years, or DALYs). The economic impact of this illness and loss of life was estimated at somewhere between USD 6 million and USD 264 million, in Tanzania alone and in just one year.

In addition to causing liver cancer, there is evidence that aflatoxin exposure also increases the risk of gallbladder cancer, although medical scientists are still investigating this link.

In Africa, as in the rest of world, cancer rates are rising. It’s thought that a million Africans will be dying of cancer every year by 2030 – unless we act now to control as many risk factors as we can. With liver cancer the third commonest type in Africa, safe foods and the use of Aflasafe give us a way to make big inroads into that death toll, perhaps preventing around 3–5% of total cancer deaths.

Return to the food safety and health page to find out about other ways aflatoxin harms us, and how we can improve food safety.